Here's a pretty simple frame saw I made using a 24" section of bandsaw blade tensioned across arms and stretchers made of hard maple. A frame saw can be used to resaw thick boards, or to rip wide boards. It is much more efficient than a hand saw in these applications due to its narrow kerf. The blade should be under high tension, and should emit a high-pitched "ping" when plucked. Here's a rough outline of how I made mine:

I made the frame from hard maple. The arms are 24" long and the stretchers are 18" across. The wider the stretches are, the easier it is to balance the saw while sawing (similar to a tight-rope walker using a long pole to balance himself.) I made hand-holds and rounded over all the edges of the saw using a drawknife, spokeshave, and finally, some light sanding. 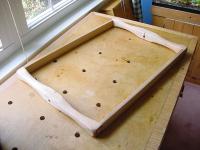 The stretchers are joined to the arms with half-blind dovetails. Due to the stresses involved in resawing, I believe this joint will be stronger in the long - run than a mortise and tenon. 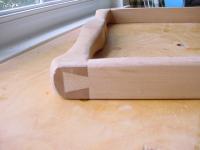 A 1/4" deep slot was also cut to accept each end of the blade. The slot keeps the blade from twisting during use. I used two 4 inch long 1/2" bolts to hold the blade. One was a carriage bolt, one was a regular hex-head. I hack-sawed the head off the regular bolt, and cut a slot down the middle. I also trimmed the carriage bolt to length, and cut a slot. I files flats on the sides of the bolts to drill a hole through the bolt. The hole in the bolt matches up to a hold drilled in the blade. When assembled, a small bolt is inserted though the blade and secured with a small nut. When assembled, the carriage bolt holds one end of the blade stationary, while tension is applied by turning a large wing nut on the other.