“The improved form of this Plane Iron renders it unnecessary to detach the Cap Iron, at any time, as the connecting screw will slide back to the extreme end of the slot in the Plane Iron, without the danger of falling out. The screw may then be tightened, by a turn with thumb and finger; and the Cap iron will serve as a convenient handle, or rest, in whetting or sharpening the cutting edge of the Plane Iron.”

There you have it, in all its glory, why the circular hole was re-positioned, after it being at the top of the blade for some 100 years. At least that’s how Stanley described the change. However, the patent drawing for the change shows what I believe is the real reason for the change – the circular disk, on the lower end of the lateral adjustment lever, loses its ability to engage the slot provided for it (in the cutter) when the iron is nearly used up. By relocating the circular hole toward the bottom of the cutter, the iron can be used right up to the slot, without sacrificing the advantage gained from the lateral adjustment lever. 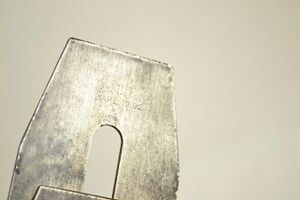